Working it out when things go wrong

The ongoing pandemic has placed many pressures on our personal lives, with one in five relationships struggling to survive according to research by University College London. It’s a further regrettable statistic from the past two years, but if divorce is inevitable, couples who work together to shape their separate futures are likely to have a more positive experience than couples who go into battle over financial and childcare arrangements.

A major development intended to help change the conversation for couples is the introduction of no-fault divorce. The Divorce, Dissolution and Separation Act 2020 will come into force in April 2022, replacing the existing Matrimonial Causes Act 1973, which has required one party to prove their partner is at fault through adultery, desertion or unreasonable behaviour, with the only alternative being a period of separation: two years where both parties agree to divorce, or five years if one side does not consent.

The new Act allows married couples to issue divorce proceedings without assigning blame, as only a statement of irretrievable breakdown will be needed. It also makes it possible to file for divorce jointly, allowing couples to reflect a mutual agreement to part.

While the Act introduces a minimum period of six months from initiating divorce proceedings to when the final order can be granted, this is unlikely to impact couples any more than the present process, because of the severe delays presently affecting the family courts.

According to government figures, most cases are taking more than nine months to be heard, which is one-third longer than before the pandemic.   And figures like this have led the justice secretary Dominic Raab to say that he wants to reduce the number of family law cases that reach court.

While the minister has emphasised that cases involving safeguarding or domestic abuse should continue to be heard by a judge, he believes that all others should be handled outside the court system, which would mean around half of all cases being settled by other means.

The pandemic has created many resource pressures, with resulting delays or cancellations most likely to affect financial disputes because cases involving the safety of children will be prioritised.  The courts are also under pressure because more couples are using them to settle divorce disputes after cuts to legal aid in 2013 saw a fall in the use of mediation by couples, as without professional guidance many couples were not aware of alternatives to court.

Official statistics for April to June 2021 reflect this, with 66,357 new cases started in the family courts, up 14% on the same quarter in 2020.  And the proportion of cases going to court with no legal representation for either party stood at 38%, an increase of 24% from the same period in 2013. 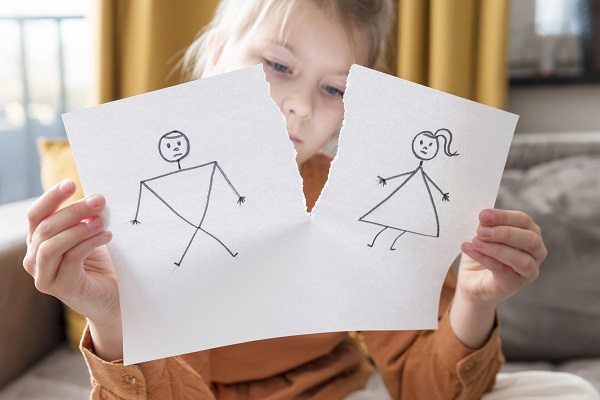 It’s understandable that couples may find themselves feeling confrontational, as the most difficult aspect of divorce is agreeing the terms on which you divide joint assets, agree any form of financial maintenance, and how you will care for any children you have together.  When this involves complex financial assets, it is more likely couples will call on specialist input, but for anyone needing to reach agreement, getting guidance in the early stages is likely to result in a faster, more cost-effective and mutually agreeable outcome.

Having the involvement of someone with the right expertise can help avoid accusations and blaming from the outset.  And it’s particularly important when children are involved.  Parents should talk to them and prepare the ground for separation, while avoiding putting children in a position where they feel they must take sides.

Mediation should be the first port of call unless there are worries of bullying or violence from a former partner.  Talking things through calmly and openly is always best, and it may help to have someone sit in to help focus those conversations on positive negotiation, whether it’s just the two of you, or with your children.  Expert input can also ensure that any agreement over assets or custody arrangements is fair for both sides.

Arbitration is another alternative to court, if separating couples are unable to come to an agreement through mediation.  In these circumstances, an arbitrator is a legal professional with specialist training, who will send their decision to the court so it can be turned into a legally enforceable order.  This would have the same force as an order initiated by the court itself, but cuts out the waiting time for a case to go to court, and also, as a private arrangement, once a date is fixed, it will not be pushed aside by other cases with higher priorities.

Because of such advantages, many couples have responded to the long delays in the courts by opting for arbitration, knowing they will see results in days instead of months.  While it is popular with the wealthy because it keeps financial matters out of the courts, it is often more cost-effective for couples because having a fixed, shorter timeframe can keep the lid on legal fees.

Whatever route is taken, seeking out the right help and support can make all the difference for couples, so they come through the divorce with a sense of a positive resolution, where everyone has an outcome that works for them and feels fair.